The flair of an artist from Basel

Urs “Däge” Degen paints lanterns which enhance Fasnacht every year – a vocation that gets him fully in the spirit of carnival months before the “three best days of the year”.

It’s a magic moment when at 4 a.m., on the morning of “Morgestraich”, the lights in the city are turned off and only the colourful painted lanterns light up the darkness. Each year, thousands of spectators admire the mobile works of art of the carnival groups (“cliques”).

Many of them are unmistakably the work of one of the most sought-after lantern artists in the city: Urs Degen, known as “Däge”, is a well-known graphic artist, illustrator and cartoonist with a passion for Basel's carnival. Creating these artistic lanterns is a heartfelt undertaking for him.

Months ahead of the carnival, “Däge” is busy with his paintbrushes before it's time again for: «Morgestraich, forward march!»

You're an artist, graphic designer and lantern painter - where do you seek inspiration in Basel?

All the time and everywhere. You just have to open your eyes, you’ll find something inspirational.

I live in Grossbasel but my studio is in Kleinbasel. Every day I stroll along the Rhine to work and back again. You’ll only see me walking – it's the only way to experience the authentic Basel and to always discover something new.

Lantern painting is a technique that was invented in Basel and that exists only here.

Until the mid-18th century, people marched through the streets with burning torches during carnival. In the narrow alleys with the many wooden houses, fire often broke out. So the Government Council prohibited open fires in the city. But just one year later, the people of Basel found a way to get round the ban: they constructed colourful boxes fitted with candles and carried them on their backs. This was a clever way to circumvent the ban – typical of Basel! Today, the lanterns are covered with fabric and varnished to make them waterproof.

I’m also fascinated by the short shelf-life of these works of art. The lanterns can be admired by thousands of people for three days – and then the magic is already over.

What’s magical about the moment when the clocks strike 4 on Fasnacht Monday morning?

Actually, it’s the last few minutes before that. When the tension grows and grows, when you feel a tingle and can hardly wait for the lights to go out. It’s a goose-bumps moment year after year. Morgestraich has a  mystical element – the sudden darkness, the bright lanterns, the slow pace of the march, struck up by all the cliques at the same time. It’s something you simply have to experience.

When do you start with the preparations for carnival?

The carnival groups hold their first sessions in October. That's where they choose their sujets – the topics they want to take up. As soon as the sujet is chosen I can get to work and think about how to portray it in an original and playful way. Because the sujets are always related to world politics or social issues, you can’t start the preparations any sooner, because the sujets have to be as up-to-date as possible. So far, there’s never been a lantern that I hadn’t completed in time for carnival.

What should people not miss during Basel’s carnival?

The lantern exhibition on Münsterplatz (cathedral square). It takes place on the Tuesday of Fasnacht each year and is always great. A highlight of Basel's Fasnacht! The Münsterplatz is a wonderfully mystical place in its own right. When 250-300 illuminated lanterns are placed there in the evening, it becomes a magnificent spectacle. It’s one of a kind in the world. It’s the largest open-air exhibition that lasts just one day. Everything you see there has been newly created but is already passé the following year.

For me it’s also very interesting to take a closer look at other artists’ lanterns.

Why is Basel Switzerland's capital of culture?

It may sound a little presumptuous but we can say so with a good conscience. The world-class museums, great architecture, the many events and of course carnival itself are important elements of Basel's culture. They all make Basel unique and attract people from around the world.

Anyone wishing to admire the lanterns in all their glory can do so at the traditional exhibition on Münsterplatz on the Tuesday of carnival. Read everything you need to know about Basel’s carnival here: 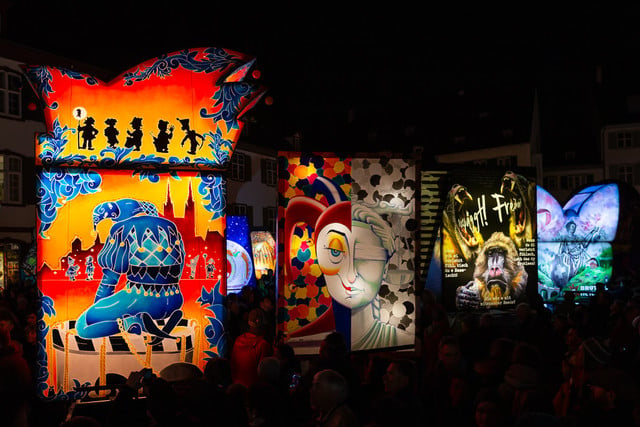